Catalans back a "yes" vote for independence 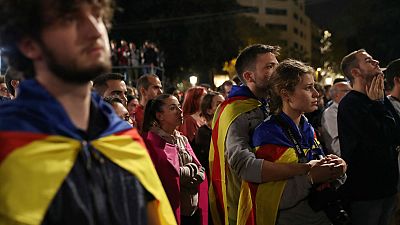 there have been celebrations in Barcelona after the Catalan government declared 90 percent voted in favour of splitting with Spain in the region’s contentious referendum.

The head of Catalonia’s regional government Carles Puigdemont (Pooch da Mon) said a right to independence had been earned.

“On this day of hope and suffering, Catalonia’s citizens have earned the right to have an independent state in the form of a republic. Hence, my government, in the next few days will send the results of today’s vote to the Catalan Parliament, where the sovereignty of our people lies, so that it can act in accordance with the law of the referendum.”

The outcome is of little surprise given that many unionists had boycotted the poll.

The law of the referendum, deemed unconstitutional by Madrid, foresees a unilateral declaration of independence by the Catalan parliament within 48 hours of a “yes” vote. The law does not set a minimum turnout for the outcome to be valid.

In the centre of Barcelona there was a festive atmosphere with people was chanting “We have voted” but there was also concern over the force used by police to try and prevent the poll.

“I could’t imagine it was going to end-up like this, that (the police) would go against the population which was voting in a democratic way, is very sad, I feel impotent,” said local Pia Marcili.

Silvia Serrano said: “I know that the referendum it is not valid that has no guaranties, but we want that our voice to be heard.”

Among those celebrating were people from the Basque country and some from as far as Quebec in Canada:

“The people of Catalonia are an amazing source of inspiration to us in Quebec and the rest of the word were they are calling for independence.”

Reporting for euronews Cristina Giner looks to what happens next:

“Following the referendum which was suspended by the Constitutional Court, its now up to the politicians to lower the social tensions and to try to heal the rupture between the Spanish and the Catalan Governments”. 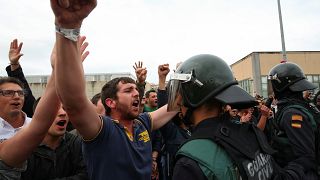