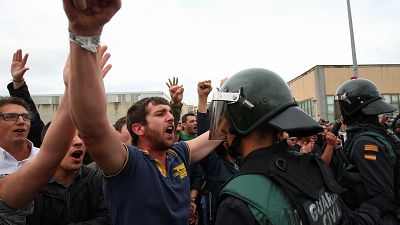 Catalans went to the polls on October 1 to vote in a referendum on independence deemed illegal by the Spanish government.

The results were later announced by the Catalan government: 90% of voters were in favour of independence, with a turnout of 42.3%.

Here are eight things we learned from the tense day of voting:

1. The referendum widened the divide between separatists and unionists. In a sign of how much it polarised Spain, on the weekend voters went to the polls thousands of pro-unity demonstrators gathered in major cities to oppose attempts to break away.

2. Spanish police showed early in the day that they would take an active approach to stopping the vote, including raiding polling stations and confiscating ballots. Officers raided the station where Catalan leader Carles Puigdemont was due to cast his ballot, forcing him to go elsewhere.

3. Some voters were determined to resist the crackdown, leading to ugly scenes of demonstrators being dragged from buildings, struck by police and fired on with rubber bullets. Security forces also clashed with local public workers including the Catalan police and fire services.

4. The Catalan Health Department said 844 people required medical assistance “as a consequence of the actions of the Spanish police” as of around 10 pm. The Interior Ministry said 19 police officers and 14 personnel from Guardia Civil, Spain’s military law enforcement agency, required medical attention.

5. In a speech following the close of the polls, Spanish Prime Minister Mariano Rajoy praised the police response and said there could be “no acceptance of this illegal referendum… We shall remain unified.”

Others offered their support to Spanish unity. The UK Foreign Office issued a statement saying the referendum was a matter for the Spanish government and people. “We want to see Spanish law and the Spanish constitution respected and the rule of law upheld. Spain is a close ally and a good friend, whose strength and unity matters to us,” it said.

Statement from foreignoffice on #Catalonia is shamefully weak. A true friend of Spain would tell them today’s actions wrong and damaging. pic.twitter.com/bBnCmn5BWw

Police violence against citizens in #Catalonia is shocking. The Spanish government must act to end it now.

Violence can never be the answer! We condemn all forms of violence and reaffirm our call for political dialogue #CatalanReferendum #Spain

8. Once the votes have been counted, the Catalan government has said that if the “yes” vote wins, it will unilaterally declare independence within two days.