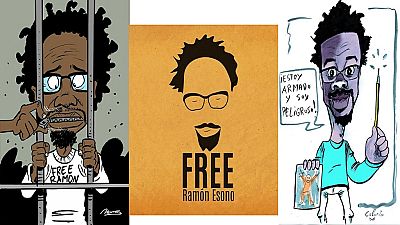 Over 5,000 people have petitioned the Equatorial Guinea President Teodoro Obiang Nguema Mbasogo to release activist and political cartoonist Ramón Nsé Esono Ebalé who has been detained for over a week without charge.

The cartoonist was arrested on September 16 in the capital Malabo by three state security agencies after leaving a restaurant with two Spanish nationals. The Spanish nationals were later released after hours of interrogation about their connection with Ebale.

He has since been interrogated over his work that criticizes the president and government officials and fears are that he may be charged with criminal defamation.

Activists, friends and family members have signed an online petition demanding his immediate release as he has been detained and interrogated for the over 72-hour limit required by the law, and he has not been taken before a judge, which should have been done within 24 hours.

Prosecuting a cartoonist for unflattering satirical drawings is incompatible with free speech and only highlights the power of the pen.

Ebalé has lived outside of Equatorial Guinea for several years and had just returned to the country to renew his passport.