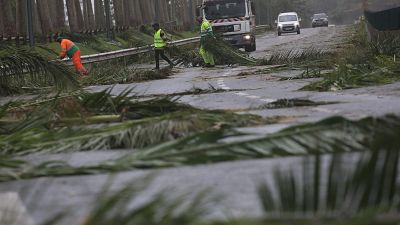 St Croix in the US Virgin Islands is the next target on Hurricane Maria’s list as it wheels its destructive way through the Caribbean.

As meteorologists we know the force that #Maria images/data represent, & my heart sinks as it spins inexorably to #VirginIslands/#PuertoRico pic.twitter.com/48FfKybpMI

Maria left Guadeloupe, Martinique and Antigua in its wake as the fringes of its category five winds that tore Dominica apart, leaving at least six dead, began to disable St Croix’s weather sensors.

There are also fears for the British Virgin Islands, Puerto Rico and its neighbours, and the southern Dominican Republic. If the winds miss them, then the tropical rains will certainly not.

Pray for #PuertoRico and #VirginIslands and keep the people on those islands in your thoughts right now. #Maria pic.twitter.com/uzCHiqneFh

In the Puerto Rican capital San Juan locals are preparing as best they can, but there is little that can resist such unprecedented forces of nature.