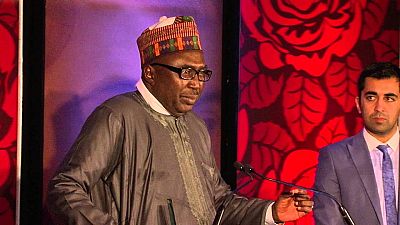 A Nigerian lawyer who helped to secure the release of dozens of the Chibok schoolgirls kidnapped by Boko Haram in 2014 was on Monday announced the winner of a U.N. prize for providing an education to children uprooted by violence in northeast Nigeria.

Zannah Mustapha is the founder of two schools which offer free education, meals and healthcare to its pupils, and even enrol children born to Boko Haram fighters to learn alongside those orphaned by the Islamist group’s eight-year insurgency.

The Nansen Refugee Award, which is bestowed by the U.N. refugee agency (UNHCR), has been won in the past by Eleanor Roosevelt and Luciano Pavarotti, and the winner receives $150,000 to fund a project complementing their existing work.

“I am exceedingly happy and motivated to do more … I will scale up my efforts,” Mustapha told the Thomson Reuters Foundation by phone from Maiduguri, the capital of Borno state.

“Some of the students that started in my school have graduated, and they are now going into university – I can use this money to help them complete the cycle,” Mustapha added.

His first venture, Future Prowess, opened a decade ago and was the only school in Borno state in northeast Nigeria to remain open when Boko Haram in 2009 began their brutal campaign to carve out an Islamic state.

The Islamist militants have killed hundreds of teachers and forced more than 1,000 schools to shut, leaving tens of thousands of children without an education, aid agencies say. [ID: “Education offers hope”]

“Education is one of the most powerful tools for helping refugee children overcome the horrors of violence and forced displacement,” Grandi said in a statement.

Mustapha’s work also includes helping to negotiate the release of more than 100 of the 220-odd girls snatched from their school in Chibok in April 2014 in the biggest publicity coup of Boko Haram’s insurgency that prompted global outrage and the international campaign #bringbackourgirls.

The return of 82 of the girls in May marked the second group release of the Chibok girls by the militants – with both deals brokered by Switzerland and the Red Cross and mediated by Mustapha – after a group of 21 were freed in October last year.

A few others have escaped or been rescued but about 113 of the girls are believed to be still held captive by Boko Haram.

The Islamist group has killed at least 20,000 people, uprooted more than 2.7 million and sparked one of the largest humanitarian crises in the world, according to aid agencies.

Despite being driven back from much of the territory it held, Boko Haram has ramped up attacks this year, targeting civilians and camps for the displaced with suicide bombings.