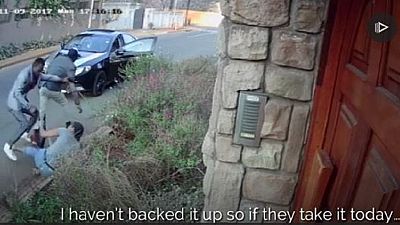 Some have died and others sustained varying degrees of injury whiles attempting to fight off thieves in South Africa.

But the story of Noxolo Ntusi, a Masters student at the University of Johannesburg, was different as she put up a fight against armed robbers and won. The 26-year-old fought off a robbery gang that wanted to take her bag.

She would not budge because the very bag contained the only copy of a crucial academic document. In the end, the robbers for some reason left her and drove off.

I was thinking about my master's. I’m almost done with what I’m writing - there’s no way I will let them take it. It wasn't very smart but I guess it worked.

“The hard drive with the draft for my master’s manuscript that I had to publish. So I was thinking about that because I hadn’t (backed it up) – I took it to work because I wanted to back it up at work. But my day got so busy that I didn’t get the chance to back it up on my work computer,” she said in an interview with local media.

A video from security cameras from the scene of the attack showed her in a struggle with two mean – one with a gun, the third one was driving the vehicle used for the operation. She was seen firmly clutching on to the bag that contained the hard drive on which her thesis was.

Ntusi who works at the National Health Laboratory Services disclosed having taken self-defense lessons after a previous incident. She added that she has since backed up her work.

“So I was thinking, the draft document was not on my laptop, it’s only on the hard drive. I haven’t backed up so if they take it today … that’s it. So basically, what was in the bag, was the hard drive and not even a lot of money – just 50 rands.

“I would have given them the bag but something in me – I just couldn’t. I wasn’t even responding to what they were saying. They were saying ‘shoot, shoot- just give us the bag,’ I wasn’t responding, I was just holding on and just screaming the whole time,” she said.

She sustained minor injuries but expressed hope that the three people police have arrested in connection with the attack will face the full rigors of law if found guilty.

“I was thinking about my master’s. I’m almost done with what I’m writing – there’s no way I will let them take it. It wasn’t very smart but I guess it worked,” she later told the BBC after her story was carried by the Times Live news portal.