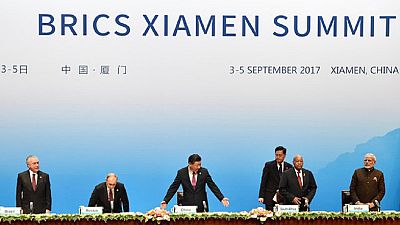 Chinese President Xi Jinping has called on the emerging markets and developing countries to work together in seeking an equitable, open, all-round and innovation-driven development supported by the Belt and Road Initiative.

Xi made the remarks on Tuesday when delivering a speech at the Dialogue of Emerging Market and Developing Countries in the coastal city of Xiamen.

At the dialogue, attended by leaders from five BRICS member states plus Thailand, Mexico, Egypt, Guinea and Tajikistan, Xi noted that China’s Belt and Road Initiative highly tallies with the 2030 Agenda for Sustainable Development and can help synergize different strategies and promote integrated development.

Four years ago, I rolled out the Belt a Road Initiative, which gained warm responses from the international community.

Leaders from the BRICS states and other developing countries in a meeting in the southeastern Chinese city of Xiamen also agreed that countries need to oppose protectionism and rebalance globalisation to make it more sustainable.

China used the meeting of the BRICS countries to promote trade liberalisation.

Chinese Foreign Ministry, Geng Shuang on Tuesday said China’s proposals at the BRICS Xiamen Summit were aimed for unity and common progress of the emerging markets and developing countries.

“The propositions and proposals China raised for BRICS cooperation and, as you mentioned, at the BRICS Xiamen Summit, aim at promoting cooperation and forging unity and joint progress of the emerging markets and developing countries,” he added.

President Xi Jinping said Countries need to work closely to build an open world economy
and not to lose sight of growing risks and downward pressure on the economy.

“Being open, inclusive, cooperative and (practising a) win-win (approach) is the only right option. Practising ‘beggar thy neighbour’ and zero-sum games will not benefit the growth of world economy — emerging countries and developing countries will be the biggest victims,” he said.

One of the progresses made by the BRICS countries at the summit was the agreement on pushing BRICS cooperation to a new high in the next “golden decade”.