Twenty hectares of the remains of Roman ruins under the sea have been discovered in Nabeul, Tunisia by a joint team of experts from the National Heritage Institute of Tunisia and the University of Sassari-Oristano in Italy.

“We started working in Tunisia and Italy in 2010. We were searching for a port and a sub-marine that can allow us to find other remains and especially to have the certainty that the earthquake in Neapolis really occured,” one of the mission experts said.

According to the Director of the mission, this is a “major discovery” which confirms ancient stories that a tsunami swallowed up part of the city of Neapolis in the 4th century.

“This discovery has allowed us to have the certainty that Neapolis was a great center of production of garum and curing. Probably the largest center in the Roman world and that Neapolis notables depended on garum,” the director of the Tunisian archaeological mission, Mounir Fantar said.

According to researchers, the expensive garum was exported to various neighbouring countries.

The team now has “the certainty that Neapolis suffered an earthquake which according to historian Ammien Marcellin, occured on July 21, 365 AD and which severely affected Alexandria. 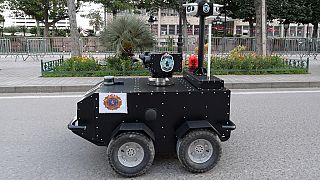