Only Mugabe can decide when he wants to retire – wife 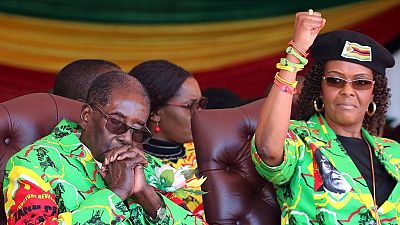 Zimbabwe’s First Lady, Grace Mugabe, says the only person who can decide on a successor for her husband, is the 93-year-old himself.

She was speaking on a campaign trail as the country heads to polls next year. The ruling Zanu-PF have chosen Mugabe as their candidate for the elections.

“If God still wants Mugabe in power, he will stay with us, God wants Mugabe to lead us, and when it’s time for Mugabe to decide that his body does not allow him to go on, he will say it himself.” He will say, “Look for a successor, I want to rest,” she told party faithful gathered in the city of Gweru.

If God still wants Mugabe in power, he will stay with us, God wants Mugabe to lead us, and when it's time for Mugabe to decide that his body does not allow him to go on, he will say it himself.

The subject of selecting a successor for Mugabe has been a thorny subject, Grace is believed to be interested in the seat as is the current Vice President, Emmerson Mnangagwa.

The comment is one of the first she has made after an assault charge was leveled against her in South Africa. A 20-year-old model accused the First Lady of physical assault in a Johannesburg hotel. Grace was able to leave South Africa after she was granted diplomatic immunity.

Grace’s recent position, however, contradicts a view she expressed in late July, when she tasked Mugabe to name a successor.

According to her it was important for Robert Mugabe to name his preferred successor to end deepening divisions over the future leadership of the ruling ZANU-PF party, the state television said in an online report on Thursday.

Mugabe has ruled the southern African country since independence in 1980 from the British. He has previously insisted that the ruling ZANU-PF, and not him, will choose his eventual successor when the time comes.

“The First Lady and Zanu PF Secretary for Women’s Affairs has challenged the President to name his successor saying this has been the trend in other countries,” ZBC said online.

“The First Lady said there is nothing wrong with Mugabe naming his successor, saying the move will enable all members to rally behind one candidate.” Mugabe was present at the meeting but did not speak.

Zimbabwe has since independence always held elections in March, with the exception of 2000 and 2013, both years when elections were delayed by a constitutional referendum.