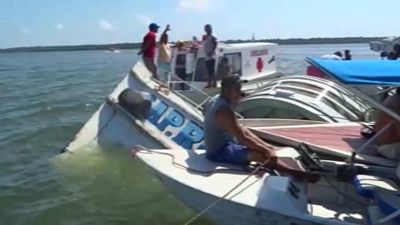 Dozens of people died when a ferry capsized in Brazil’s coastal Bahia state,
in the country’s second fatal accident this week.

Local authorities said 21 others were rescued by the navy after the accident on an early morning short route from the island of Itaparica.

Survivors say the boat capsized after it was hit by a powerful wave about 200 meters from the marine
termina,.

Salvador, one of Brazil’s most famous cities, is located on a peninsula near a handful of islands used daily by commuters.

In a separate incident, a passenger boat sank on the Xingu River in the Amazon’s Para region to the north, leaving at least 21 dead with five people still missing. It is thought the ferry may have sunk after getting caught in a storm.

The Para state government said in a statement the boat was not legally authorised to carry passengers.

The Amazon waterways are one of the main forms of transport in a region which has relatively few roads.