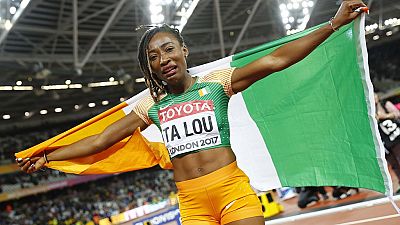 Ivorian athlete Marie-Josee Ta Lou missed the gold medal in the women’s 100 metres world championship in London on Sunday, but won a consolation silver and praises from her country.

28-year-old Ta Lou was denied the gold medal by 26-year-old American athlete Tori Bowie by less than a single hundredth of a second. Bowie dipped perfectly to finish in 10.85 seconds.

Despite the narrow miss of Ivory Coast’s first world title in any event, the West African country’s president Alassane Ouattara was quick to applaud the athlete for the silver medal.

“Congratulations Marie-Josee Ta Lou for your silver medal at the World Athletics Championships. I’m proud of you!” Ouattara tweeted on Sunday.

Congratulations Marie-Josee Ta Lou for your silver medal at the World Athletics Championships. I'm proud of you!

This was followed by other congratulatory messages from proud Ivorians who couldn’t hold back their pride.

Marie-Josee Ta Lou has won several medals on the continental level and recently won her personal best of 10.86 seconds at the 2016 Rio Olympics finishing fourth in the 200 metres.