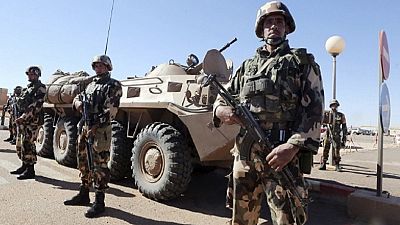 Algerian police have broken up an Islamic State militant cell led by a former al Qaeda commander convicted in France more than a decade ago for planning an attempted bombing in Strasbourg, a security source said on Wednesday.

Mohamed Yacine Aknouche, 43, was once a Europe-based affiliate of Algeria’s Islamic Armed Group (GIA), and was sentenced in absentia by a French court in 2004 to eight years prison, said the source, who asked not to be named.

The source told Reuters that Algerian forces captured Aknouche this week near Tipaza, a coastal city 50 km west of the capital Algiers where officials charge he had been planning to carry out attacks on security forces. It was not clear when he had returned to Algeria.

Militant attacks and bombings are rarer in Algeria since the North African country ended its decades-long 1990s war with armed Islamists in which 200,000 people died.

But remnants of al Qaeda brigades remain active and Islamic State has been trying to recruit more people.

The Algerian newspaper Ennahar quoted unnamed security sources as saying the cell was based in the village of Ain Taggourait and had plotted attacks in Algiers. Aknouche’s cell, it said, had trained in a nearby forest using homemade weapons.

After the 1990s war, Algeria fought several armed groups in a bloody conflict that ended when many militants accepted a truce and reconciliation deal.

There were around 35,000 active militants at the height of the conflict, but security sources say there are now between 800 to 1,000, mostly in remote mountain and border areas.

A hardcore of militants that stayed in the mountains after rejecting the peace accord belong to both Al Qaeda in the Islamic Maghreb (AQIM) and the local branch of Islamic State known as Jund Al Khilafa. They have mostly targeted security forces in remote areas with ambushes.

In 2014, Algerian special forces killed the leader of Islamic State local branch. Security sources named him as Abdelmalek Gouri and said he was behind the kidnapping and beheading of French tourist Herve Gourdel in September 2014. Like Aknouche, Gouri was a veteran of the 1990s war.