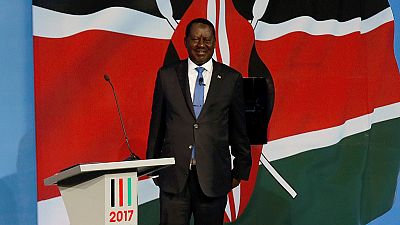 Kenya’s main opposition presidential candidate Raila Odinga has stressed on his allegations of conspiracy between the ruling party and security agencies to rig the upcoming elections on August 8.

The National Super Alliance (NASA) flagbearer said on Monday night that he is reliably informed about the conspiracy and warned the security services to desist from interfering with the elections.

“I have not been crying wolf. Kenyans know the truth. The National Intelligence Service must desist from interfering with the election process,” he cautioned.

“I was the Prime Minister and used to co-chair the National Security Advisory Committee. I have information. When I am talking, I am talking with authority and nobody can dispute me,” he added.

I have not been crying wolf. Kenyans know the truth. The National Intelligence Service must desist from interfering with the election process.

Odinga made the remark during the presidential debate which was broadcast live on national television and snubbed by President Uhuru Kenyatta.

Kenya’s security agencies and the presidency have since denied the allegations.

The former Prime Minister was the only candidate present after an initial show of disinterest to participate in the debate.

Kenyatta pulled out, like his running mate in an earlier debate, saying they were not consulted.

Odinga had the entire 90 minutes to himself and he laid out his plans to boost the economy, security and fight corruption.

He said his top priority will be to reduce food prices and rent to reduce the stress on the population.

“First is the issue of putting food on the table, reducing the cost of living for the people. This is our priority number one. We address the issues of flour, so that we can lower the prices of maize flour, sugar,” he said.

“If I was the President, I would not be watching Formula 1 in Dubai when the people are being attacked by Al Shabaab. I would lead from the front. During national holidays, you keep seeing all these weaponry being displayed. But they are nowhere when the attacks happen,” he said on security.