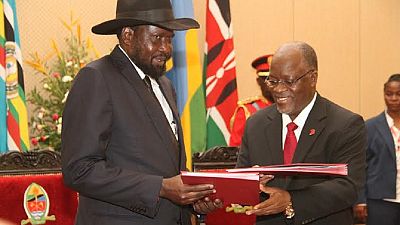 The South Sudanese government has called on Tanzania to send Swahili teachers to the country as it introduces the language in school curriculum ahead of its adoption as an official language.

The request was made by South Sudanese Vice President Taban Deng Gai on the sidelines of the just ended African Union Summit on Tuesday, Tanzania’s Vice President Samia Hassan said in a statement cited by local media The Citizen.

South Sudan also requested for assistance in other sectors of its economy including health, agriculture and security, the statement added.

Swahili has been adopted as the official language for the East African Community (EAC), of which South Sudan is its latest member after it deposited the instruments of ratification on the Accession to the EAC Treaty last year.

The language is part of the commitments entered in 2007 by the EAC, whose three founders – Kenya, Uganda and Tanzania – use Swahili as their official language alongside English.

Rwanda is yet to make it its fourth official language after national language Kinyarwanda, French and English.