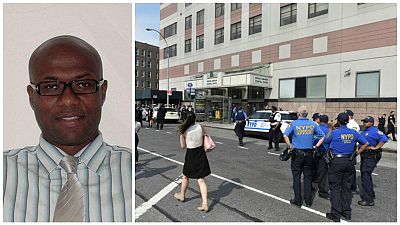 A gunman who opened fire with an assault rifle inside a hospital in the Bronx Borough of New York, killing one doctor and injuring six other people has been identified as a Nigerian.

Dr. Henry Michael Bello, a 45-year-old Nigeria-born family medicine doctor was formerly employed at the hospital, according to sources.

He was wielding an assault rifle and stormed Bronx-Lebanon Hospital Center on Friday, gunning down at least six staffers before taking his own life, according to a senior law enforcement officials.

The NYPD has also identified him to be a Nigerian-born doctor.

Bello, 45, shot dead a woman, on the 17th floor and injured at least six others on the 16th floor, before killing himself the New York Police Department (NYPD) Commissioner James O’Neil, said.

Five of his victims were seriously injured and “fighting for their lives”,.

Authorities believe he wore a doctor’s coat and used his old badge to sneak past security at the hospital.

Bello was found dead of a self-inflicted gunshot wound on the 17th floor after a two-story shooting rampage that left one doctor, a woman who has yet to be identified dead and others fighting for their lives.

A senior law enforcement official said Bello asked for a specific doctor on the 16th floor. When he was told that doctor wasn’t there, he became angry and started shooting at everyone.

Officials said Bello tried to set himself on fire before committing suicide. A photo provided by authorities shows him dead on the floor of the hospital, wearing a bloodied doctor’s coat.

Bello used an AR-15 in the shooting. It wasn’t immediately known if he obtained the rifle legally.
He went to medical school on the island of Dominica in the Caribbean.

Law enforcement officials described Bello as transient recently, with at least five different addresses since he left the hospital.

Police are investigating the shooting as a case of workplace violence; authorities say there is no indication of a nexus to terrorism.