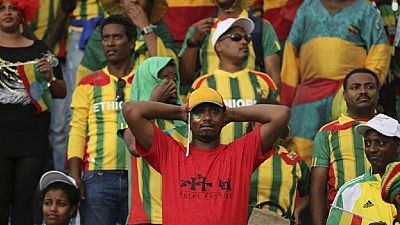 Heavyweights Algeria and Ghana recorded victories in their 2019 African Nations Cup qualifiers on Sunday but Egypt, runners-up in Gabon earlier this year, were beaten 1-0 in Tunisia.

Ghana, who have reached the semi-final stage at the last six tournaments, began in emphatic fashion with a 5-0 home victory over Ethiopia in Group F.

Captain Asamoah Gyan put them ahead after 10 minutes before John Boye and Ebenezer Ofori made it 3-0 at half-time in Kumasi. Debutant Raphael Dwamena then scored two more after the break.

Algeria looked tentative in their first competitive outing under new Spanish coach Lucas Alcaraz but edged Togo 1-0 at home thanks to Sofiane Hanni, who lobbed home in the 24th minute after being set clear by Islam Slimani.

Also in Group D, Stephane Sessegnon scored an early goal for Benin, who held on for a 1-0 win over the Gambia in Cotonou.

In Group J, Egypt went down 1-0 in Tunisia where Taha Yassine Khenissi scored the only goal just after half-time of a match that kicked off at 11 P.M. because of the Ramadan fast.

Newly appointed Zimbabwe captain Knowledge Musona grabbed a hat-trick as they beat Liberia 3-0 in front of a boisterous crowd in their Group G match in Harare where the attendance was swelled by a decision to cut ticket prices to only $3.

Godfrey Sserunkuma scored seven minutes from time to hand Uganda a 1-0 win away in the Cape Verde Islands in a Group L game postponed by 24 hours when their scheduled flight from Dakar was delayed for eight hours by technical problems.

The Central African Republic led Rwanda 1-0 through Junior Gourrier’s goal just after half-time and after conceding the equaliser in added time grabbed the winner through Salif Keita just before the final whistle in Group H.

The next round of qualifiers for the finals in Cameroon will be played in March. There are 12 groups from which the winner qualifies along with the three best runners-up.