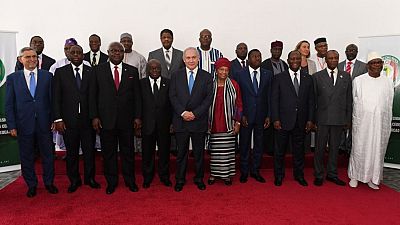 Israeli Prime Minister Benjamin Netanyahu has called on African leaders to partner with his country so as to build the continent’s capacity.

He said the continent has a future and with Israel’s success in technology, Africa will realize its dreams of finding solutions to its problems.

“Israel has the solutions for many African challenges.”
- IsraeliPM in #ECOWAS summit on Monrovia.#IsraelinAfrica pic.twitter.com/9UpmXBOQwX

“I saw the resources, diversity, passion, and young entrepreneurs who are building companies. Africans are seizing the future and Israel wants to seize this future with you,” Netanyahu told West African leaders on Sunday at the 51st ECOWAS Summit of Heads of State in Liberia’s capital Monrovia.

Russia, China, India, are doing all these programs with us, and the benefits that Israel gives to them are the benefits we want to give to the people of Africa.

“You truly have no better partner for this mission than Israel because Israel is a world leader in all areas of technology … Every field is becoming technologized,” he added.

The prime minister said his mission is to strengthen Israel’s relationship with the continent which is the country’s top priority.

He offered partnerships in technology, agriculture, security among other areas to “help Africa achieve its rightful place among the peoples and nations of the Earth”.

“I come here as an instruction of the simple truth, Israel is coming to Africa and Africa is coming back to Israel. I believe in Africa, I believe in its potential, present and future,” he said.

“It is the use of technology that allows you to leap forward over generations … Our cows as an example. Our cows produce more milk than any cow in the world … every moo is computerized and the results are tremendous productivity … Russia, China, India, are doing all these programs with us, and the benefits that Israel gives to them are the benefits we want to give to the people of Africa,” he added.

Netanyahu invited the leaders of the ECOWAS member-states to the Africa-Israel summit in Togo in October where he is expected to meet with the leaders of 25 African countries to discuss multilateral cooperation.

Before his visit to Liberia, he told local media that the purpose of the trip was to “dissolve this majority, this giant bloc of 54 African countries that is the basis of the automatic majority against Israel in the UN and international bodies.”

He called on the West African leaders to support the reinstatement of Israel as an observer in the African Union.

Benjamin Netanyahu is the first non-African leader to ever address an ECOWAS Summit and also the first Israeli leader to visit West Africa since the 1960s.

He embarked on a four-state East African tour last year and visited Uganda, Kenya, Rwanda and Ethiopia, which marked the first time in decades an Israeli premier had traveled to Africa.