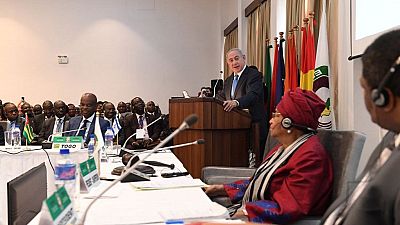 Israel lost its observer status in 2002 when the Organisation of African Union was dissolved and replaced by the AU.

“Israel should once again be an observer state of the African Union … I fervently believe that it’s in your interest too, in the interest of Africa. And I hope all of you will support that goal,” Netanyahu told West African leaders at the 51st ECOWAS Summit of Heads of State in Liberia’s capital Monrovia on Sunday.

“I ask for your support in rejecting anti-Israel bias at the United Nations, and in bodies such as the General Assembly, UNESCO and the Human Rights Council,” he appealed.

Israel should once again be an observer state of the African Union ... I fervently believe that it’s in your interest too, in the interest of Africa. And I hope all of you will support that goal.

He likened Israel to Africa and said a change of mind is what will bring peace to the world.

Palestine was granted an observer status in the African Union in 2013 and its leader Mahmoud Abbas has addressed the Union on a number of occasions.

Israel strongly believes its absence in the African Union has affected the country in terms of votes in international forums as a result of the country’s voice not being heard.

Before his visit to Liberia, he told local media that the purpose of the trip was to “dissolve this majority, this giant bloc of 54 African countries that is the basis of the automatic majority against Israel in the U.N. and international bodies.”

“Israel is a small nation that dreams very, very big. Lets work together to realize big dreams for all our people. Let our dreams be so audacious. But just as those who doubted Israel were proven wrong, let us ensure that the skeptics who doubt Africa are also proven wrong,” he told the West African leaders.

Netanyahu concluded by saying: “Israel is a nation that loves and respects all … In Israel, Jews, Christians and Muslims live side by side as equal citizens. This is the real Israel.”