At least 44 migrants have been found dead at Agadez in Niger about 1000km from Niamey.

Among them are men, women and children who were on their way to Europe before being found dead in the desert.

Rescue teams of the Red Cross have been on the spot to better understand the circumstances surrounding the dead of the migrants.

So far it has been revealed that the migrants died of thirst after their vehicle failed.

Temperatures in Agadez currently hover around 40 degrees Celsius but have hit almost 50 degrees (122 Fahrenheit) in the past.

The area is now one of the main points of transit for migrants in West Africa … who sometimes face many criminals on their way.

About 40 migrants from Gambia, Guinea and Senegal were rescued by the army last May as they moved to Europe. 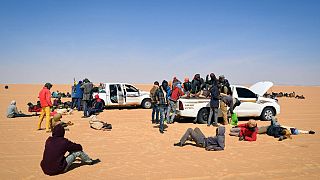