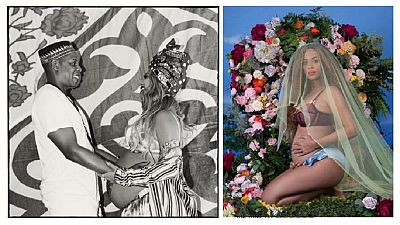 Powerful U.S. showbiz couple, the Carters – Beyonce and Jay-Z, switched to African mode as part of a ‘push party’ for their yet-to-be-born twins. The pair have a 5-year-old daughter named Blue Ivy Carter.

Beyonce posted three pictures on her official handle photo-sharing social media platform, Instagram, showing her with husband Jay – Z in what was labeled as ‘The Carter Push Party.’ The dates indicated that the photos were taken on Saturday, May 20, 2017.

In all three photos, the global music icon is seen wearing a skirt made from African prints with an accompanying headscarf equivalent to what the Nigerians call ‘gele.’

Jay-Z spotted an all white attire – T-shirt, trousers, footwear, he, however, wore a cap that resembles that of a shepherd somewhere in Somalia or Sudan. Then around his neck is a chain with an African map at its lower end.

Beyonce, who is a singer, a songwriter and actress, in February 2017 released a picture of her pregnant self on Instagram to announce that she was carrying twins.

“We would like to share our love and happiness. We have been blessed two times over. We are incredibly grateful that our family will be growing by two, and we thank you for your well wishes. – The Carters,” accompanied that photo which ‘broke’ the social network site.

The photo became the most-liked image ever on Instagram, with more than 7 million likes, as her fans reacted to the news that their hero would soon be giving birth to twins. 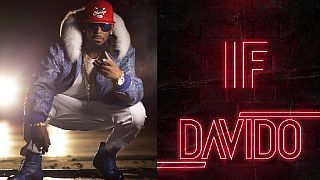 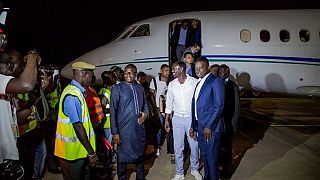 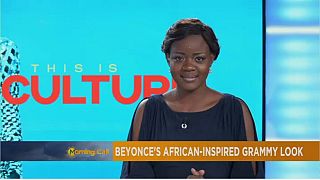