Rare hailstorm gives Zambians a snowy feel in May 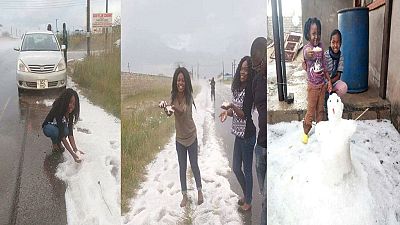 Zambians in the capital Lusaka and surrounding towns woke up Monday morning to see their streets and backyards filled with ice.

This was as a result of a rare hailstorm that fell after a heavy rainfall Sunday night, local media Lusaka Times reported.

Snow rarely falls in Africa but on mountains in South Africa, the Maghreb and on Tanzania’s Mount Kilimanjaro. However, hailstones do fall sometimes in southern Africa when the temperature hits record lows.

The hailstorm in Zambia reduced the temperature to 12 degrees Celsius on Monday. This did not deter residents from having a jolly time in the ice.

Many posted pictures on social media as they built snowmen and played in the hailstones.

Below are some snowy moments shared on social media.

They are calling hail, snow in Zambia pic.twitter.com/eAHKr71DdU