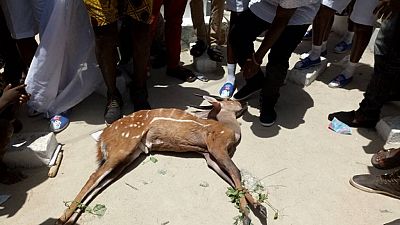 The festival season in Ghana is gradually shifting into full swing with various communities across the country celebrating their traditional festivals.

The chiefs and people of the Effutu traditional area in the country’s central region at the weekend celebrated their annual Aboakyir festival, which literally means hunting for game – in this case, bushbuck or deer.

The colourful festival is used to commemorate the migration of the people of Winneba from the ancient Western Sudan Empire to their current location along the coast of the central region.

It is celebrated on the first Saturday in May and this year’s was no exception.

Led by traditional leaders dressed in their colourful regalia, the chiefs and people went on a procession through parts of the Winneba township before settling for a grand durbar.

The highlight of the festival is the presentation of a live bushbuck to the chiefs and people at the durbar.

According to the history of the people, a young member of the royal family was to be sacrificed every year to appease the god who led the people of Winneba on their journey to their current location centuries ago.

But the people appealed through the fetish priests to the gods to have the sacrifice changed. The appeal was accept and instead of a human life, the town was expected to sacrifice a wild cat.

Many lives were however lost in the hunt for the wild cat so another appeal was made again for a change of game.

The appeal resulted in the decision to accept a mature live bushbuck or deer.

Two hunting groups, the Tuafo (Number one) and Dentsifo (Number two), have since bore the task of capturing the live bushbuck and presenting it to the people at the durbar.

The group that captures the live animal is then hailed for their bravery. Quiet apart from the recognition, locals believe they may have a bumper harvest or not depending on the group that first presents its game for sacrifice.

“We are looking for a new season, what really will happen. So, this is part of a system which actually goes on and at the end of the day, when the number one group catches, we expect a bumper harvest, and when the number two also catches, that we expect a lean season,” said Kwesi Enninful, a resident of Winneba.

And from all indications, it appears Winneba might be on for a really bumper harvest as the Number One group also known as the Tuafo asafo group, caught the live bushbuck this year.