UK troops in South Sudan on a support mission 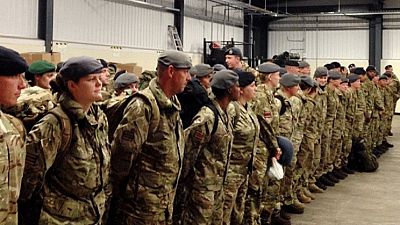 Several dozen British troops on Tuesday arrived in Juba, capital of South Sudan, to provide engineering and medical support to the United Nations Mission in South Sudan (UNMISS) and to help ease the delivery of humanitarian aid, the mission said.

“The Royal Engineers will conduct tasks at the U.N. Camps to improve accommodation, routes, security and drainage, as well as the construction of a jetty on the River Nile and a helicopter landing site,” UNMISS said in a statement.

Britain’s Ministry of Defence said 35 troops had landed to bolster a more than 200-strong deployment of British personnel already in the country. That number will rise to nearly 400 in the coming months, making it one of the Britain’s largest operational deployments.

The conflict has split the nation along largely ethnic lines and the United Nations has warned of a possible genocide. More than 3 million people have fled their homes out of a population of 12 million.

The U.N. has declared a famine in some parts of the country and nearly half its population face food shortages.

Last month a 350-strong Japanese military contingent started withdrawing from South Sudan after a five-year deployment during which it mainly helped with infrastructure construction.