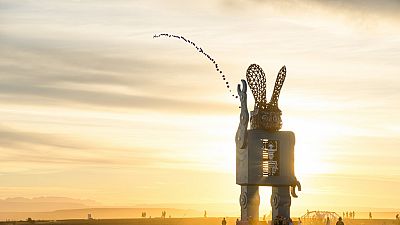 A temporary city of art has been created in the desert of South Africa during the annual AfrikaBurn event in the Tankwa Karoo in the Northern Cape.

Launched in 2007, AfrikaBurn is a creative regional project featuring construction of temporary artworks.

Some of the works are burned towards the end of the event. Elaborate costumes, music, and performance are also shown during the event.

This year there are 13,000 people at the event, and it is a very big experiment in creativity and community.

This year’s event started on April 24 and will end on Sunday.

“This is AfrikaBurn 2017. This year there are 13,000 people at the event, and it is a very big experiment in creativity and community,” said Travis Lyle, director, AfrikaBurn.

A Sweden designer, Agust Helgason brought an art installation in the shape of giant baobab tree to the event.
He said the work is a combination of both Scandinavian and African arts.

“We’ve prepared for the whole year. And for two months we’ve been building the Giant Baobab Tree. And essentially it’s an investigation of the Scandinavian culture and the African culture, taking the tree of life from the Nordic countries and the tree of life from Africa, and combining them into one modern tree,” he added.

Krishnee Governor, an enthusiast of vehicles, decorated her mutant vehicle into a pangolin, using paper to mimic scales on its surface.

“The people didn’t even know that the pangolin is the most trafficked animal. So I wanted to do something to kind of bring that into focus a little. And so that’s why I picked this animal and it proved to be quite a challenge, obviously, because the pangolin is covered with scales, and to get all the scales on and to design the structure was quite tricky,” said Governor.

AfrikaBurn has become the biggest art festival in Africa, drawing a large number of artists, musicians, vehicle enthusiasts and tourists to the desert in South Africa each year.