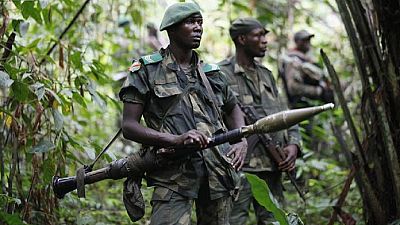 The United Nations said on Monday it was horrified by a video screened by the government of Democratic Republic of Congo that appeared to show the brutal killing of two U.N. investigators.

Congo’s government showed the film to reporters in Kinshasa on Monday, saying it showed members of an anti-government militia carrying out the act.

Government spokesman Lambert Mende did not explain how authorities obtained the video, but said they were showing it to rebuff suggestions that Congo authorities were complicit in the killings.

Our colleagues in the DRC (Democratic Republic of Congo)have seen the video and we are utterly horrified at what appears to be the killing of Michael Sharp and Zeida Catalan.

The pair, from the United States and Sweden, went missing on March 12 on a mission to the Kasai Central province, where rebels have intensified an anti-government insurgency in recent weeks that has left dozens dead on both sides.

“Our colleagues in the DRC (Democratic Republic of Congo)have seen the video and we are utterly horrified at what appears to be the killing of Michael Sharp and Zeida Catalan,” said U.N. human rights spokeswoman Ravina Shamdasani.

The U.N. is carrying out its own investigation into the killings and has urged Congo to do so as well.

The video shown to a group of journalists in the capital Kinshasa on Monday appeared to show the two experts walking with a group of men wearing red headbands characteristic of the local Kamuina Nsapu militia, according to a Reuters reporter present.

Since July, when the militia first launched an uprising, the United nations estimates at least 400 people have been killed.

The film, narrated by a Congolese police spokesman, cuts mid-way through and the two are seen sitting on the ground and then shot. Catalan is subsequently beheaded.

Government spokesman Lambert Mende said it was filmed by the Kamuina Nsapu militia and had been secured by police.

He declined to give further information on how the video was obtained, but said it was being screened to show that Congo was not responsible for their deaths.

“Our police and soldiers are accused of being implicated in the assassination of the two U.N. experts. That is not the case,” he said. “The images speak for themselves. It is not our soldiers that we see in the video executing the two U.N. workers but the terrorists of the Kamuina Nsapu militia.”

Congo’s government is under pressure to investigate the violence in Kasai, where the United Nations says it has found a total of 40 mass grave sites it says may need to be probed by the International Criminal Court if the government fails to.

Tensions with the West are also high due to criticism of Kabila, whose mandate to rule the country of 70 million people expired in December 2016.