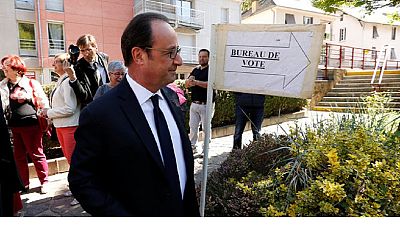 French President Francois Hollande cast his vote in the first round of a bitterly fought presidential election that is crucial to the future of Europe and a closely watched test of voters’ anger with the political establishment.

“All the measures have been taken and I would like also to thank the communes that associated themselves to the necessity of being vigilant and assuring all the French citizens the conditions to exercise this fundamental right that is to choose their future. We have made sure, with the government, the Prime Minister, and the Interior Ministry and as I said previously with all the local collectivities, these guarantees,” he said.

He noted that the period the country is right now is neither recent nor over, adding that they have to mobilize a lot of means and in particular for the two days of vote for the presidential election and then the legislates.

All the measures have been taken and I would like also to thank the communes that associated themselves to the necessity of being vigilant and assuring all the French citizens the conditions to exercise this fundamental right .

However, the National Front mayor of Henin-Beaumont where French presidential candidate Marine Le Pen will cast her vote, says he is hopeful for a far-right win.

Henin-Beaumont mayor Steeve Briois on Sunday said his National Front party was full of hope’ over a win for leader Marine Le Pen.

“We are full of hope because for five years the French people have had the socialist party in power, whereas before they had the UMP (now known as The Republicans party) and in the end nothing changed. So today there is a decisive vote, that’s the one for Marine Le Pen as only that can change France,” he said.

Le Pen is expected to cast her vote later in the National Front stronghold, with party members including her campaign director David Racheline gathering at the polling station.

The former mining community is widely expected to vote in favour of Le Pen, who polls say will make the second round of the country’s two-stage election on May 7.