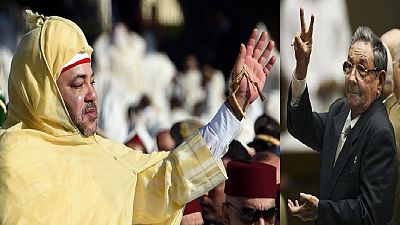 Ambassadors of the two countries to the United Nations signed a memorandum of understanding on Friday in New York to reestablish diplomatic ties.

Cuba’s Foreign Ministry confirmed in a statement that: “Guided by the mutual will to develop friendly relations, the two governments agreed to reestablish ties as well as political, economic and cultural cooperation.”

Guided by the mutual will to develop friendly relations, the two governments agreed to reestablish ties as well as political, economic and cultural cooperation.

Already, King Mohamed VI of Morocco is reported to have ordered the opening of an embassy in Havana.

Morocco cut ties with Cuba in 1980 after the latter’s recognition of Western Sahara and support for the Polisario Front.

Cuba has since trained several Saharawis.

Morocco annexed Western Sahara , a former Spanish colony in 1975 and fought the Polisario Front. It considers the mineral-rich territory as its “southern provinces” and has proposed wide-ranging autonomy.

The UN brokered a cease-fire in 1991 and established a peace keeping mission to monitor and help prepare a referendum on the the territory’s future which has never taken place.

Polisario Front insists on self-determination through a referendum for the local population which is estimated at between 350,000 and 500,000.