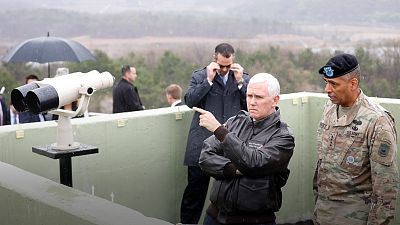 The US vice president has reiterated that the “era of strategic patience” between his country and North Korea is over.

Mike Pence visited the demilitarised border between North and South Korea on the first stop of a four-nation Asia tour intended to show America’s allies and adversaries that the Trump administration is not turning its back on the increasingly volatile region.

Pence arrives at U.S. base in South Korea next to DMZ border with North https://t.co/MNY8nLHdzL pic.twitter.com/mQpJWxnifm

He landed in South Korea hours after the North’s failed missile launch.

His visit came a day after North Korea held a military parade in its capital, Pyongyang.

The event marked the 105th anniversary of the birth of founding father, Kim Il Sung.

What did Pence say?

That the US would stand by its “iron-clad alliance” with South Korea and is seeking peace through strength.

“All options are on the table to achieve the objectives and ensure the stability of the people of this country,” Pence told reporters.

He said US President Donald Trump has made it clear he will not talk about specific military tactics.

These brave service members from the US and South Korea stand guard as freedom's first line of defense. pic.twitter.com/SQyHnbEXRL

What is the demilitarised zone?

It runs right across the Korean peninsula with soldiers on both sides.

What is Trump’s strategy on North Korea?

It reportedly focuses on tougher economic sanctions, possibly including an oil embargo, a global ban on its airline, intercepting cargo ships and measures against Chinese banks doing business with Pyongyang.

Trump is hopeful China “will take actions needed to bring about change in policy” in North Korea, Pence told reporters.

“But as the president has made very clear, either China will deal with this problem or the US and our allies will,” the US vice president added.

“Japan will closely cooperate with the US and South Korea over North Korea and will call for China to take a bigger role,” Abe told parliament.