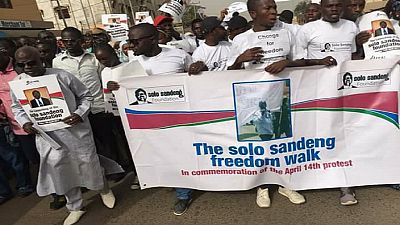 Despite former Gambian President Yahya Jammeh’s rule with an iron fist, opposition members in the country decided to step up to him and demonstrate last year calling for political reforms.

Little did they know that it will be the beginning of the end of Jammeh’s regime amidst torture, imprisonment and deaths.

The main opposition United Democratic Party (UDP) led by Ousainou Darboe hit the streets arm-in-arm on April 14, 2016 but were dispersed by police leading to the arrest of five members of the UDP including National Organizing Secretary Ebrima Solo Sandeng.

Only two days after their detention, Solo Sandeng was pronounced dead in detention. The cause of death was only given as “shock and respiratory failure”.

Sandeng’s death sparked another demonstration on April 16 resulting in more arrests including that of the leader Ousainou Darboe.

Ousainou Darboe and 17 others were sentenced in July, 2016 to three years in prison on several charges including unlawful assembly, incitement to violence and conspiracy. They pleaded not guilty.

They spent the rest of their days at the notorious Mile Two Prison in the capital Banjul.

In August, another UDP member, Solo Krummah, died in detention shortly after surgery for an undisclosed illness.

He was arrested with over a dozen others in early May during the continued opposition protest.

The tables began to turn ahead of the December 1 presidential elections that saw seven opposition parties unite to topple Yahya Jammeh.

The opposition coalition was led by the new leader of the United Democratic Party (UDP), Adama Barrow, who had received the blessing of the party’s founder Ousainou Darboe from prison.

Barrow beat Jammeh at the polls; and after series of mediations and military threats, Yahya Jammeh left the country on exile to the Equatorial Guinea.

The jailed UDP leader Ousainou Darboe and other political prisoners were released from prison after the election that ended the 22-year rule of Yahya Jammeh.

Ousainou Darboe is currently the Foreign Affairs Minister of The Gambia and now the UDP Secretary General.

It is one year on April 14, 2017 since the death of Solo Sandeng and the beginning of the end of Yahya Jammeh’s rule.

Ousainou Darboe led a procession in the capital Banjul on Friday in commemoration of the April 14 protest.

The Solo Sandeng Foundation has been created to remember the struggle, while former head of Jammeh’s secret service has been charged with the death of Sandeng, and faces two counts of conspiracy to commit felony and murder.

Solo Sandeng…His killing immensely influenced a change of gov’t. 12 months on, we have Solo Sandeng Foundation.