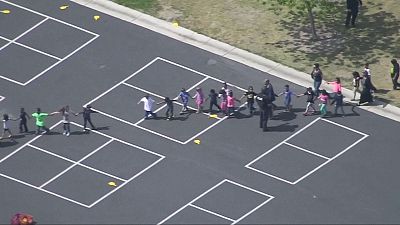 A man opened fire with a pistol in a school classroom in Southern California, fatally wounding a woman presumed to be the teacher.

Two children are said to have been wounded before the gunman turned the weapon on himself, shooting himself dead. They were injured because they were close to the woman, and were taken to hospital.

The school was being evacuated and students taken to a nearby high school.

As police and emergency services responded, the local police chief said the shooting at Northpark Elementary School appeared to be a “murder-suicide”, adding that it was believed the suspect was “down”.

Police then said the gunman shot a woman in the classroom and that investigators did not believe children were targeted.

Investigators were working to confirm the identities of the gunman and the dead woman and to determine their relationship, if any, police said at a news conference.

The city of San Bernardino was the scene of a shooting rampage in December 2015 when a husband and wife – inspired by Islamist extremism according to the authorities – killed 14 people and wounded more than 20 at an office party. The couple were later shot dead by police.