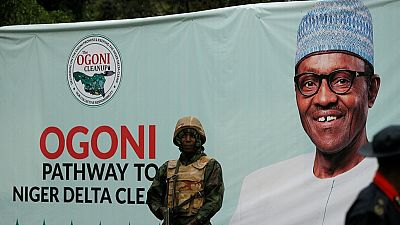 Nigeria has given contractors 30 days to resume delayed development projects in the Niger Delta oil region or face prosecution, the presidency said on Tuesday.

The government has been trying to build new roads and launch other projects to drag the region out of poverty and create jobs, aiming to give local people alternatives to joining the militants attacking oil facilities.

The government has “directed that the list of all contractors who have not returned to site within the stipulated period be compiled and submitted to the Ministry of Justice and the Economic Financial Crimes Commission for investigation and prosecution,” it said in a statement.

Many projects have been delayed due to the collapse in oil revenues or to graft accusations.

The presidency also ordered the ministry of environment to ensure “progress” of an cleanup of oil spills in the Ogoniland area, a project delayed for years.

“The Federal Government has issued a new set of directives in its bid to accelerate the implementation of the (President Muhammadu) Buhari administration’s new vision for the development of the Niger Delta,” it said in a statement, referring to the contractors’ order.

The government has been holding talks with militants to end attacks on oil production facilities which cut the OPEC member’s output by 700,000 barrels a day for several months last year.

But a lack of development and an army crackdown on thousands of illegal refineries in the southern swamps, which process crude oil stolen from oil majors and state oil firm NNPC, have raised tensions.

Militants behind last year’s attacks called for more of Nigeria’s energy wealth to go to the Delta.

Last year’s attacks, combined with subdued oil prices, were a major factor in Africa’s largest economy shrinking 1.5 percent in 2016 – its first full-year contraction in 25 years. There have been no attacks so far in 2017.