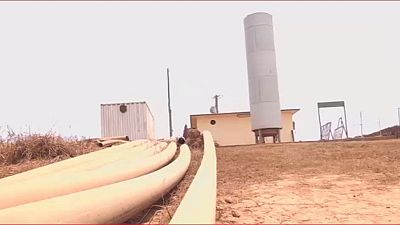 Cameroon’s hygiene and garbage company “Hysacam”, is determined to combat pollution in Yaoundé.

To do this, the company has installed a biogas catchment and treatment plant ten kilometers from the capital Yaounde.

Each day, the centre processes nearly 1300 tonnes of garbage collected by Hysacam trucks in Yaounde.

“Today, we are using this technical method to collect biogas from the garbage. Because this centre is vetted by the United Nations, we are among the companies who believe in this mechanism and we have invested in that domain in Cameroon. It is a major project,” Claude Eboute Mbappe, Agency Director, Hysacam Yaounde said.

The transformation goes on in a twenty meters deep zone which is as broad as a tennis court.

After a few days of decomposition, the capturing of biogas can begin. This avoids the emission of methane generated by the garbage into the atmosphere, which is harmful to health and the environment. “We have put in place a network for the processing of biogas through wells, through all these networks that you see all around here. Therefore the facilities are made and then, using a suppressor, it sucks the biogas. It is simple, it transforms just the biogas, made up mainly of methane to carbon dioxide. Therefore, we reduce environmental pollution,” Takam Staggers, deputy head of the biogas unit said.

Reducing pollution is a genuine concern for some Cameroon’s civil protection agents who work to ensure that pollution does not become a danger to the population.

“The site was not randomly chosen. When choosing a site to dump garbage, we first make an analysis of the soil and it has been revealed to us that the soil here may not allow the infiltration of water from the waste to the point of polluting the groundwater and we have seen how waste management is done. I am reassured,” an official of Cameroon’s Civil Protection Agency, Yap Mariatou said.

Twenty years ago, Hysacam started dumping garbage at Nkoloufou, many neighbours around abandoned their homes because of bad odour and flies, the situation has changed since the centre began.

“At first there were difficulties, We had a lot of of odour, there were flies, and lots of mosquitoes. Since then everything has changed. You are on the site, you no longer feel the odour you do not see the flies. Therefore I will say that concerning the treatment of garbage, everything is going on well,“a local chief of Nkoulfoulou said.

Hysacam has invested about 3 billion FCFA to realize the project.

The company is concerned about greenhouse gas emissions. They are also say they are looking forward to diversify into the production of electricity using biogas extracted from the garbage.