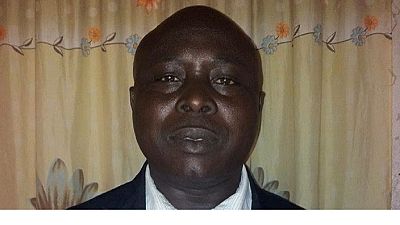 Police in the Gambia say investigators have exhumed the body of Solo Sandeng who died in custody during the administration of former president Yahya Jammeh.

The opposition leader and activist led a peaceful opposition march for political reform on April 14, 2016, but died in detention shortly after his arrest by state security agents.

The incident unleashed wave of anger among many in the country who voted Jammeh out of of power eight months after.

I can confirm that the remains of Solo Sandeng are currently lying at the Edward Francis Small Teaching Hospital in Banjul.

According to the police spokesman, Foday Conta on Thursday, his body was found near the western coastal village of Tanji and will undergo forensic investigation at a hospital in the capital, Banjul. He said his remains were exhumed on Saturday.

Conte noted that police discovered the burial site based on testimonies by detained national intelligence agency officials, who had worked under Jammeh.

Police said Saikou Omar Jeng; the former director of operations at the notorious national intelligence Agency (NIA), led the police to a grave in Tanje, a small fishing village around 33km from Banjul.

“I can confirm that the remains of Solo Sandeng are currently lying at the Edward Francis Small Teaching Hospital in Banjul,” a source at Banjul police headquarters told AFP.

Sandeng’s death sparked protests by his party, the United Democratic Party, the incident is seen as a key factor in the formation of an unprecedented coalition of opposition parties that ousted Jammeh from power.

Jammeh provoked outrage by responding to UN calls for a probe into the cause of Sandeng’s death with the words: “This time, there is only one dead and they want investigations? I will not,” while speaking to magazine Jeune Afrique.

Jammeh ruled the small west African nation for 22 years, and he is widely accused of human rights violations, including torture and arbitrary arrests.