Scores of migrants rescued off Libya 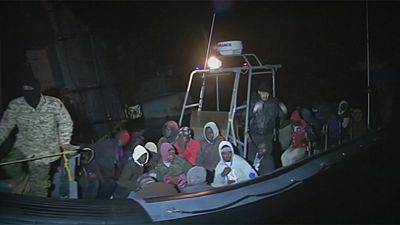 The Libyan coastguard says its officers intercepted more than 100 African migrants at sea on Sunday.


Photographer Olmo Calvo's (of the AP) images of African migrants (in Libya) trying to get to Europe https://t.co/4VXW2GGglF pic.twitter.com/s071rE12QI

It comes after at least 1,131 were intercepted near the western Libyan city of Sabratha over the last week.

Around 700 were picked up from three wooden vessels in the same area on January 27.

Why has the focus switched to Libya?

The country has become the main point of departure for migrants trying to cross the Mediterranean by boat to Europe.

The route between Turkey and Greece, known as the “Balkan route”, was largely closed off last year.

The migrants are sent back to detention centres and shelters that rights groups have criticised for their inhumane conditions and widespread abuses.

What about the people smugglers?

They are said to operate with impunity, launching migrants in flimsy vessels that often break down or sink before they are spotted by rescue boats operated by an EU naval mission and by NGOs.

What the coastguard says

“Today, we patrolled an area north of Tripoli, and we arrested between 100 and 110 migrants, we brought them here to Tripoli’s naval base,” said spokesperson Fayez Abdelnasser

What the migrants say

“I live in Sabratha and then I paid 300 dollars to go from Sabratha to Italy, we left yesterday at midnight and spent 20 hours at sea,” one of the rescued migrants told the Reuters news agency.

What the EU says

On Friday, EU leaders offered Libya money and other assistance to try to curb the record migrant flows from the North African country.

Aid groups have criticised the decision.


The European Union tries to prevent a wave of migrants from Libya https://t.co/XNro4AD7bo


Ostensibly trying to save lives, EU would condemn migrants to the horrors of chaotic Libya. https://t.co/QIwOqgE5nQ pic.twitter.com/JUGzrrTXur