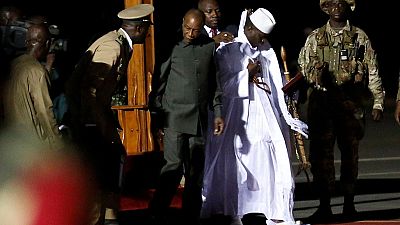 Former Gambian President Yahya Jammeh is accused of emptying the country’s coffers and exiling with over $10 million.

An adviser to new President Adama Barrow disclosed on Sunday at a press conference that the country is in financial crisis due to the action of the former president.

“The coffers are virtually empty … within two weeks, 500 million dalasi (over $10 million) have been withdrawn,” Mai Ahmad Fatty said.

“It has been confirmed by technicians in the ministry of finance and the Central Bank of the Gambia,” he explained, adding that an evaluation is ongoing to determine the actual losses.

The coffers are virtually empty ... within two weeks, 500 million dalasi (over $10 million) have been withdrawn.

Yahya Jammeh who has ruled Gambia for 22 years flew out of the country into exile on Saturday with over a dozen luxury cars and other items.

Jammeh who is going to settle in Equatorial Guinea agreed to step down after over a month of mediation and negotiations by African leaders, ECOWAS bloc, the United Nations among other top political personalities including a military intervention.

He lost the December 1 election and conceded for only a short period after which he backtracked to accuse the electoral commission of voter irregularities and called for a rerun.

As part of the agreement reached on Saturday for him to step down, ECOWAS, AU and UN assured Yahya Jammeh, his family and aides of safety, security and rights.

Also, the international bodies will “prevent the seizure of assets and properties lawfully belonging to former President Jammeh or his family and those of his Cabinet members, government officials and Party supporters, as guaranteed under the Constitution and other Laws of The Gambia.”

“ECOWAS, the AU and the UN will work with the Government of The Gambia to ensure that former President Jammeh is at liberty to return to The Gambia at any time of his choosing in accordance with international human rights law and his rights as a citizen of the Gambia and a former head of state,” the 14-clause agreement stated.