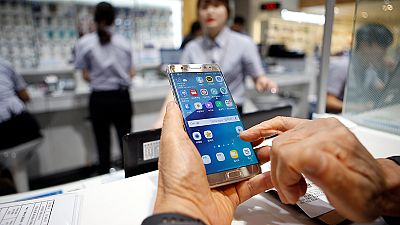 It was one of the biggest product safety failures in tech history.

The rival to Apple’s iPhone was withdrawn from sale last October, less than two months after its launch.

We will give product quality and customer safety top priority

It comes after a recall was followed by reports of replacement devices also catching fire.


The South Korean tech giant has ruled out problems with the device’s hardware and software. It gave details of the battery trouble in a statement.

“Taking this incident as an opportunity, we have strengthened our determination,” Samsung’s mobile chief Koh Dong-jin told reporters in Seoul on Monday.

“From now on, we will give product quality and customer safety top priority.”

Samsung did not name the battery suppliers on Monday but previously identified them as affiliate Samsung SDI Co Ltd and China’s Amperex Technology Ltd (ATL).

SDI said in a statement that it would invest 150 billion won (120 million euros) to improve product safety and expected to continue to supply batteries for Samsung phones.

Samsung said it accepted responsibility for asking battery suppliers to meet certain specifications and did not plan to take legal action against them. The company touted longer battery life and fast charging as major improvements when it launched the Note 7.

Amid the safety scare, images of melted Samsung devices spread on social media and airlines banned travellers from carrying them on flights. The product failure wiped more than $5 billion (4.6 billion euros) off operating profits.


.@samsung blames faulty batteries for the fires that led to the recall of its flagship Galaxy Note 7 device. https://t.co/Kj8SCVuXyK #9News pic.twitter.com/fWvk0bT3LH


Eager to enhance product safety, Samsung has now indicated that the launch of its new Galaxy S8 smartphone could be delayed.

It will not be unveiled at the Mobile World Congress (MWC) trade show in Barcelona, which begins on Feb. 27, the traditional forum for Samsung premium product launches.