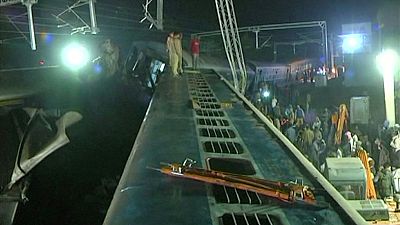 A train crash in eastern India has left at least 36 people dead and more than 50 injured.

Nine carriages of an express train came off the tracks in the state of Andhra Pradesh.

The Hirakhand express train was travelling from Jagdalpur to Bhubaneswar and drailed late at night near the town of Rayagada.

The cause of the crash is under investigation and foul play is not being ruled out.

Chandralekha Mukherjee, an Indian Railways official, told reporters: “We can see that the track is broken at two places.

“The two tongue rails next to the main stock rail, the main rail on which the wheel is, we can see cuts on them. This is being looked into by an expert team.”

The derailment happened in a part of the country where Maoist rebels have been operating.

I pray for a speedy recovery of all those injured due to the train accident: PM narendramodi

India has a terrible safety record when it comes to deaths and accidents on the country’s railways.