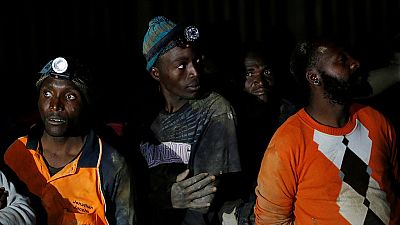 <h3>About 1,700 miners of the Harmony Gold Mining in South Africa have staged a sit-in strike on Wednesday at 2.4 kilometers below the surface of the Kusasalethu mine in West Rand district of Gauteng province.</h3> <p>The strike began on Wednesday, and according to the company in a statement, the action of the workers was illegal and they have not made any formal demands.</p> <p>“The sit-in started on Wednesday, January 11 when employees chose not to return to surface at the end of the morning shift. No formal demands have been made by the participating employees,” the statement cited by South African business news site Fin24.</p> <p>“Management has sought to engage with union leadership with the purpose of resolving the matter and returning all employees to surface,” the statement added.</p> <p>South Africa’s National Union of Mineworkers confirmed the strike action on Thursday via Twitter. The Union said it is “busy establishing what could be workers demands.” <blockquote class="twitter-tweet" data-lang="en"><p lang="en" dir="ltr"><span class="caps">NUM</span> has been informed of an underground sitting-in by 1700 workers at Kusasalethu mine, busy establishing what could be workers demands</p>— <span class="caps">NUM</span> (@NUM_Media) <a href="https://twitter.com/NUM_Media/status/819459929534791681">January 12, 2017</a></blockquote> <script async src="//platform.twitter.com/widgets.js" charset="utf-8"></script></p> <p>The company announced last year that it will halt mining at the Kusasalethu mine in five years due to high cost of operation.</p> <p>The Kusasalethu mine employs about 4,500 people.</p>