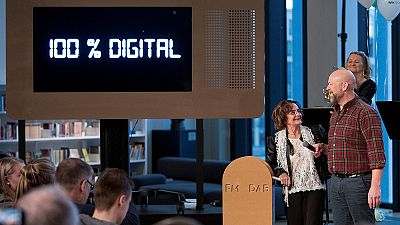 Norway has become the first country in the world to begin switching off its FM radio network.

For the moment the scheme applies only to northern Nordland, but the whole country will be digital by the end of the year.

The government says DAB radio will save money, allow more broadcasters, and sound better, but that is only if people can hear it.

“New products will be introduced onto the market over the next few months, they will have tactile buttons and a text-to-speech function. This means that what’s on the display will be read out loud,” said the Norwegian Media Authority’s Line Langnes.

Critics say that while FM programmes in mountainous Norway need many transmitters and is costly, reception at the launch was poor, and especially elderly people, particularly dependent on the radio, with first-generation DAB sets will have to upgrade to DAB+ devices. Two point three million car owners will have no DAB in their vehicles, either. Many fishermen are also said to be ill-equipped for the changeover.

One newspaper opinion poll revealed two-thirds of the population think the government is moving too fast.