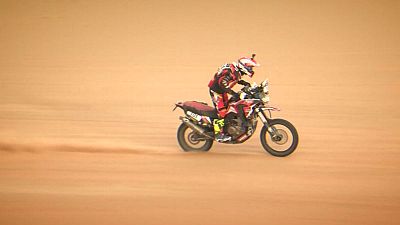 A third days racing in the Mauritanian sand dunes for the drivers of the Africa Eco race, but the fatigue of everyone involved was evident ahead of the special stage, and with just four days to go until the finish.

It was a terrible day for the second-placed motorbike in the race. Italy’s Paulo Ceci burned out his KTM’s clutch, and saw his chances of a podium finish after eight days of gruelling competition disappear like a desert mirage.

Third on the day was Morocco’s Harite Gabari, but gearbox problems meant it will also be very hard for him to hope for a podium finish.

Bike category leader and second on the day was Gev Sella, the young Israeli, but he ran out of fuel when he had a 10 minute lead. He had his closest competitor to thank as Norway’s Pal Anders Ullevalseter, who went on to win the stage, gave him a litre of fuel so he could finish, but he still clawed back nearly 13 and a half minutes from the stricken leader.

Second in the car-truck category, Kazakhstan’s Andrey Cherednikov had a bad day, dropping to sixth overall after losing an hour and a half to a major mechanical failure.

The day belonged to Mathieu Serradori, who took the risk of starting without his automatic tyre inflation system working, but took his second stage win in his buggy.

Russia’s Vladimir Vasilyev continues to hold the lead in his Mini, despite getting seriously stuck in the sand which dropped him to eighth place on the day, but he still holds a lead of over an hour and a half over Thomasse.

Compatriot Andrey Karginov reigns as king of the trucks, recording the day’s second-fastest time, which also meant he rose to second overall in the general classification. He drove his Kamaz hard, to the delight of race organiser Jean-Louis Schlesser.