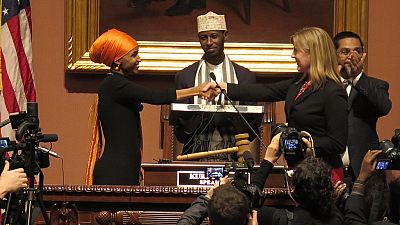 Ilhan, who is always spotted with the hijab – head gear for Muslim women – made history by winning in a State House race to serve the people of Minnesota.

Today, we celebrated. Tomorrow, we continue to fight for social, economic, and racial justice for all Minnesotans. Forward together.

She will be a lawmaker in the Minnesota House of Representative for District 60B. Her legislative area comprises parts of the Cedar-Riverside neighborhood, south-east Minneapolis and the University of Minnesota.

Her first tweet after taking office on Tuesday read, ‘‘Today, we celebrated. Tomorrow, we continue to fight for social, economic, and racial justice for all Minnesotans. Forward together.’‘

As the first Somali-American, Muslim woman in the nation to hold an office at this level, she was celebrated widely in her home country with the President at the time, Hassan Sheikh Mohamud extending congratulations.

Somali President Congratulates Ilhan Omar who has been declared the winner in the race for State Representative in District 60B, Minneapolis

She is a policy analyst, coalition builder and community educator. She left Somalia due to the civil was then to Kenya before ending up in the US. Her twitter bio describes her as ‘‘Intersectional feminist, mom’‘ and legislator.

Ilhan Omar, the first Somali-American US legislator, was sworn in today at mncapitol. pic.twitter.com/uLIXVz7IFo

“It’s the beginning of something new. This district has a legacy of making history. I am excited for our progressive values and to be able to be on the ground at the Capitol representing the diverse people of my district and being a champion with them and for them,” she said after winning the elections last year.

“Most recently, she served as the Director of Policy Initiatives at Women Organizing Women, where she empowered East African woman to take civic leadership roles in their community. Ilhan lives in the West Bank neighborhood of Minneapolis with her husband and their three children,” her official website stated.