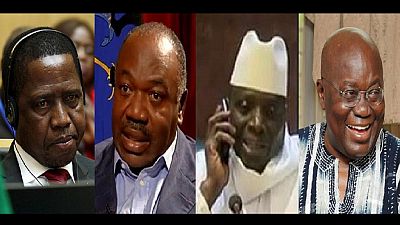 The year 2016 had a series of election engagements at the presidential, legislative and local election levels.

As part of our review of the ‘fading’ year, we take a quick look at all the polls that took place this year. This is the concluding part of this piece after the first review.

With special focus on the presidential race, we will look at them within the context of main players and how they ended, and if there were any special circumstances around the particular polls.

The presidential race was between incumbent Edgar Lungu, leader of the ruling Patriotic Front (PF) party. He went into the August 11 presidential election with nine other contenders.

His main challenger however was Hakainde Hichilema, leader of the main opposition United Party for National Development (UPND). At the end of the polls, Lungu was declared a first round winner with 50.35% of the vote.

Hichelima according to the Electoral Commission of Zambia (ECZ) got 47.6% of the votes. The incumbent president won with some 100,000 votes. The opposition protested the results and headed to court, the case was dismissed on a technicality and Lungu duly sworn in as president.

Gabon went to the polls to elect a new president. The lead up to the vote was loaded with tension as the opposition tried to use the courts to disqualify the incumbent, Ali Bongo Ondimba. The nationality challenge however failed.

There were 14 contenders but the front runners were Bongo and Jean Ping – a former African Union Commission chairperson.

Bongo was declared winner after which violence broke put resulting in deaths and the burning of the national assembly and attacks on the opposition headquarters. Ping filed a challenge at the Constitutional court but the court affirmed Bongo’s victory.

Ping till date continues to challenge the legitimacy of Bongo, he recently filed a case against the government with the International Criminal Court (ICC) relative to post election violence.

The ANC conceded that they needed to have an introspection into the results which were their worse showing in the local polls. ANC got 54%, DA ended with 27% and EFF got 8% of votes.

The 2016 poll according to the electoral body was the most competitive local elections since 1994. The IEC CEO Moepya said 96% of voters believed the election to be free and fair. 96% expressed general satisfaction with staff conduct during the polls.

Sao Tome and Principe held presidential presidential elections on 17 July 2016. Due to the inability to get a clear winner, a second round was called for August 7.

The opposition defeated the incumbent in the country’s presidential polls second round held in August. Candidate Evaristo Carvalho, a one time prime minister won the first round.

He polled 50.1% of the votes against the incumbent President Manuel Pinto da Costa. The small African archipelago of barely 200,000 inhabitants has suffered harsh economic conditions with 90% dependency on international aid.

Cape Verde also held local elections in September as did Seychelles who also held legislative polls between 8 – 10 of the same month.

Somalia also held elections for the Upper House of its legislature. That of the Lower House has also been held. The representatives in both houses will elect a president.

The 329 members will decide, through a secret vote, who the next president of Somalia. The presidential elections was postponed form November 30. It is billed to be the final election of the year 2016, it is slated for 28 December. The incumbent is up against about 17 other contenders.

Main Contenders were: President Jorge Carlos Fonseca, candidate of the Movement for Democracy party, he came up against Albertino Graca and Joquim Monteiro.

Its main rival, the Authenticity and Modernity Party, which had campaigned against the “Islamisation” of Moroccan society, won 102 seats. The legislative elections held in Morocco were described as just and transparent, according to Rights Groups in Morocco.

Results of the October 30 referendum showed that over 93 percent of the voters had backed the new charter, that President Alassane Ouattara says will ensure peace in the wake of years of political turmoil.

Opposition parties called for a boycott of the polls, saying the new decree was designed in a way that will allow Ouattara to line up his choice of a successor and solidify his coalition. Turnout was 42.41 percent of registered voters.

Mali’s local elections held on November 20, 2016 were marred with protests and boycotts in the northern and central parts of the country. They were meant to fill posts left vacant in the north but only saw the burning of ballot boxes and the kidnapping of one candidate.

The municipal elections have been delayed four times. The polls were the very first since the 2013 presidential elections were held. The ruling party and opposition parties recorded successes and losses evenly.

The DRC was supposed to go to the polls to elect a new president. Given the signs that Kabila will not necessarily leave office, the opposition embarked on protests that were clamped down by the security agencies.

As at December 20 when Kabila was supposed to leave, an agreement is being reported, which suggests that Kabila will stay on till end of next year instead of the earlier time line that said elections could be held reasonably by April 2018.

Gambia – Jammeh’s loss and U-turn, Gambia on the precipice?

Gambia’s presidential elections were held on December 1, President Yahya Jammeh was expected to win the polls as he stood for his fifth term since coming to power in 1994. Jammeh came up against two other contenders, Adama Barrow – candidate for an opposition coalition and a third candidate, Mamah Kandeh who was once a member of Jammeh’s party.

24 hours after the voting, there were reports that Jammeh had lost in the capital Banjul and that he had agreed to concede defeat to Adama Barrow. He was later shown congratulating Barrow in a telephone call.

A week later, Jammeh announced the annulment of the results citing irregularities and intimidation of his supporters in parts of the country. He has stated clearly that he is not going to leave power lest a new poll is run.

Despite international condemnation by international groups including the ECOWAS, UN, AU and EU Jammeh maintains that he will not hand over come January 17. Meanwhile the chief justice has slated January 10 as the day for first hearing of a poll petition filed by Jammeh’s party.

Ghana on December 7 went to the polls to elect a president and members of parliament (MPs). It was the 7th election under the 4th republican constitution.

The Electoral Commission (EC) Akufo-Addo as President-elect. The EC’s decision followed the verification that Mahama had called to concede defeat in the polls. The NPP also got an outright majority in the parliament with over 170 seats in the 275 seater house.

Ivory Coast’s ruling coalition party won an absolute majority of 167 parliamentary seats out of 254 in the country’s legislative elections.

The RHDP secured 67.75% of the seats ahead of the Independents who won 29.53% of seats. The voter turnout, according to the IEC, was 34.10% making it one of poorly participated elections in the country. The new parliamentarians are made up of 225 men and 29 women.

December 28 is the date slated for the presidential elections in Somalia after being postponed thrice.

Somalia’s political leaders agreed on the date with the expectation that a new parliament will elect a speaker on December 22, before the legislators elect a president.