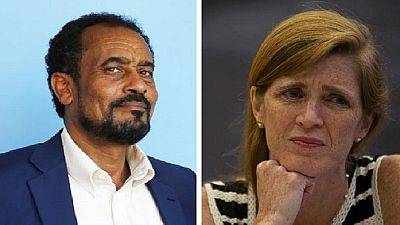 Samantha Power, the Unites States ambassador to the United Nations (UN) has called for the release of a leading Ethiopian opposition member, Bekele Gerba.

December 23 marks a year that Gerba – deputy Chairman of the Oromo Federalist Congress – is in detention, he has been held by authorities along with 20 others as part of Ethiopia’s Anti-Terrorism proclamation.

‘‘We call on the Government of Ethiopia to release all political prisoners and ensure all Ethiopians enjoy the protections of their constitutional rights,’‘ Power said.

We call on the Government of Ethiopia to release all political prisoners and ensure all Ethiopians enjoy the protections of their constitutional rights.

The ambassador is leading the US government’s #FreeToBeHome political prisoner campaign which is aimed at putting the spotlight on persons who are ‘‘missing because a government chose to muzzle their voices and lock them up.’‘

‘‘The stories of these individuals will highlight the broader struggle faced by so many families of political prisoners, who have to commemorate countless family occasions with loved ones behind bars,’‘ she added.

There are two other African governments the US is calling on to release political prisoners. The Egyptian and Gambian governments in respect of Omar Mohamed Ali and Fanta Jawara respectively.

Seven other nationals the US is campaigning to have released from political detention include: