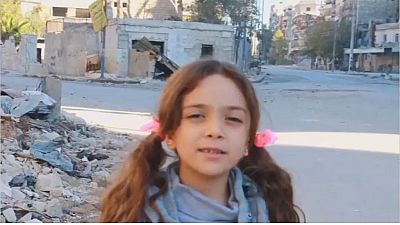 The final message read “we are sure the army is capturing us now” shortly before the account was deleted.

Bana Alabed had gained some 137,000 followers and shared videos and pictures of life during the conflict from her @AlabedBana account with the help of her mother.

In November she had posted several tweets describing bombings in eastern Aleppo.

One said: “Last message – under heavy bombardments now, can’t be alive anymore. When we die, keep talking for 200,000 still inside. BYE.- Fatemah”.

Several hours later, a picture of the young girl covered in dust was uploaded with the text: “Tonight we have no house, it’s bombed & I got in rubble. I saw deaths and I almost died. – Bana #Aleppo”.

At least 300 people have been killed since the government-led offensive on eastern Aleppo began and about 250,000 are thought to be trapped in besieged areas.

Several twitter users are calling for information on the girl’s whereabouts.