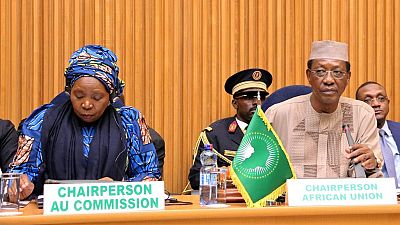 Ethiopia has disclosed that it will back the candidature of Kenya’s foreign affairs chief in the race to elect the new chairperson of the African Union (AU).

Kenya’s topmost diplomat Ambassador Dr. Amina C. Mohamed is one of five candidates hoping to be elected to replace outgoing chair, Dr Nkosazana Dlamini-Zuma. Dlamini-Zuma accepted to stay on as chair after the heads of state failed to choose her successor during a summit in Kigali, Rwanda.

She launched her campaign for the post in the Ethiopian capital, Addis Ababa on Tuesday. On Wednesday she met with the Ethiopian Premier, Hailemariam Desalegn, to hand him a message from Kenyan President. She also thanked the premier for supporting her candidature for upcoming elections.

What is in the package of the Kenyan candidate?

She told reporters that in her race to AUC Chairperson she is paying due attention to unleash Africa’s potentials for industrialization, to eradicate poverty, and to create job for Africa’s youth which are stipulated under Agenda 2063.

Enabling a free movement of goods, services and capital from one corner of Africa to the other are also a key priority in her campaign, she added. According to Mohamed, ensuring the benefits of African youth will be her ultimate goal if she wins the chair as leader of the continental body.

The two sides also held talks on peace and stability concerns of the Horn of Africa and ways of strengthening Ethiopia-Kenyan economic partnership. The two neighbours are leaders in the region and are actively engaged in military operations against Somalia’s al-Shabaab insurgents.

The five aspirants for the AUC position will face off in a debate on December 9 ahead of their election in January 2017. The Commission sent out invitation last week for the debate which will be in the town hall format at the Union’s headquarters in Ethiopia’s capital, Addis Ababa.

The five candidates for the AUC Chairperson position include:

The South African Nkosazana Dlamini-Zuma has been the AU chairperson since 2012 and did not apply for a second term during the earlier nomination process.