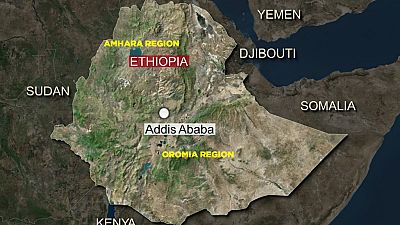 This is the concluding part of our article, Ethiopia: A year after protests started – Timeline of events [1] which took a retrospective look at the events in Ethiopia a year after anti-government protests broke out.

In this piece, we start from late August when Ethiopian athlete Feyisa Lilesa made an anti-government protest sign to win bronze at the Olympics. We go through UN and rights groups’ call for independent probes into the deaths.

The African Union spoke on the portests, the European Union leader had her say as did German Chancellor, Angela Merkel. After deaths at a thanksgiving festival – the Irreecha in Bishoftu – and subsequent protests that followed, the government imposed a state of emergency in between time and then a government reshuffle followed.

I welcome a national effort, but believe the Government should also consider the need for an independent, impartial and international effort to affirm or revise the allegations.

When the 2016 Olympics started in Brazil, little did the Ethiopian government expected that the issues back home will be thrust into the global limelight.

That is exactly what athlete Feyisa Lilesa did on the last day of the Games (August 21). The runner crossed his arms above his head as he finished the event as a protest against the Ethiopian government’s crackdown on political dissent.

He came second in the men’s marathon after finishing the 42 kilometer race. He later claimed that his life was in danger. He sought for for asylum in the United States and has been living there since leaving Rio.

Away from the Olympics, another Ethiopian marathoner followed the action of Lelisa. Ebisa Ejigu crossed over his hands over his head as he crossed the finish line to emerge the winner of the Quebec City Marathon in Canada.

Click to read Africanew’s first story on the protests.

The African Union (AU) finally issued a statement on developments in Ethiopia. The AU has its offices in the country and their seeming silence on the protests in the country had raised eyebrows. They also joined calls for restraint on the part of government and the protesters.

‘‘The socio-political situation in Ethiopia has led to a number of reported deaths, temporary disruptions of public and private businesses, as well as occasional interruption of telecommunication services.

‘‘The AU Commission Chairperson reiterates the AU’s support for the respect of the rule of law, and peaceful demonstrations which are critical tenets in the upholding principles and culture democracy,’‘ the statement signed by Dr Nkosazana Dlamini Zuma concluded.

Specifically on Ethiopia, Zeid Ra’ad Al Hussein, the United Nations High Commissioner for Human Rights, said it was important for the Ethiopian authorities to open its doors for UN investigators despite the assurance by the government to conduct a probe into the protest deaths.

‘‘I welcome a national effort, but believe the Government should also consider the need for an independent, impartial and international effort to affirm or revise the allegations,’‘ he said.

In late September, Ethiopian Prime Minister, Hailemariam Dessalgen, insisted that the country is able to launch investigations into deadly protests that have gone on in recent months and that as a sovereign country they should be allowed so to do.

Then came the news that popular Ethiopian actor, Znah-Bzu Tsegaye, according to a Voice of America (VOA) decided to seek asylum in the United States after leaving the country two months ago. His decision to go into exile is linked with the heavy security crackdown on protesters in the Amhara and Oromia region. Tsegaye, is from the Amhara region.

November was a busy month for Ethiopia and things kicked off pretty early in the month during the Irreecha Festival in the Oromia region. The thanksgiving festival of the Oromia people in central Ethiopia was disrupted on November 2, after police fired teargas to disperse protesters in Bishoftu.

Among the thousands of festival participants, a number of them marched chanting anti-government slogans and their arms crossed above their heads which solicited the police reaction.

The government called for three days of national mourning a day after several people died during the stampede. The stampede was sparked by Ethiopia’s special forces who fired teargas and warning shots to disperse protesters at the annual Irreecha thanksgiving festival in the town of Bishoftu.

The government blamed “anti-peace forces” for the stampede which they say has claimed 52 lives. Opposition groups and human rights groups put the casualty figures far above the official record.

As part of the protests that followed the festival stampede, protests kept spreading in the country. Public and private property were reportedly attacked.

The federal government declared a 6-month state of emergency on Saturday, October 8, 2016. The cabinet of PM Hailemariam Desalegn imposed the curfew after an emergency meeting citing deteriorating security situation in Oromia regional state.

The High Representative of the European Union (EU) for Foreign Affairs and Security Policy, Federica  Mogherini, in a phone call with PM Hailemariam Desalegn asked Addis Ababa to respect democratic principles and civil rights in the country.

She further underlined the need for transparency and determined engagement by the government to respond to the grievances of the population. The EU said it expected the opening up of the democratic space, and respect of fundamental freedoms.

German Chancellor, Angela Merkel, asked the Ethiopian government to allow protests and that police response to these protests should be proportionate. She also called on the government to include opposition groups in the political process. Merkel was in Ethiopia on the last leg an African tour.

Human Rights Watch (HRW) also backed the earlier call by the UN human rights chief for an independent probe into the deaths. Later in November, the outgoing Foreign Affairs chief will go on to accuse HRW and opposition in diaspora of fueling the protests by peddling untruths.

The government also indicated that tourists were free to visit sites in the country without serving prior notice to the Command Post that was administering the state of emergency. This emphasized reports that the curfew was affecting tourism revenues.

Meanwhile, some European governments – Germany and the United Kingdon – joined the United States in issuing travel alert for their nationals heading to Ethiopia. The US embassy whiles warning citizens said their work was affected by the curfew situation.

‘’…the decree restricts U.S. and other foreign diplomats from traveling 40 kilometers outside of Addis Ababa, which severely affects the ability of the Consular Section to assist U.S. Citizens,’‘ the embassy said.

The government also reported mass arrests under the state of emergency and also gave strong indications that it will hurl ringleaders to court. Later in the month, the government announced the release of 2000 detainees after they received counselling.

The parliament on November 1, approved a new cabinet formed by Prime Minister Desalegn after he promised to address concerns of inadequate representation of other regions in government.

Two key ministries were handed to Oromos, thus Workneh Gebeyehu, who was formerly Transport Minister moved to Ministry of Foreign Affairs and Dr Negeri Lencho, journalism professor at the University of Addis Ababa was handed the Communication Affairs Office post.

The government lifted restrictions on diplomats travelling in the country without permission. As part of the state of emergency, diplomats were banned from travelling more than 40km (25 miles) from the capital, Addis Ababa.

Ethiopia’s tourism revenue took a massive dip in the wake of anti-government protests, the country projected a loss of about 400 million dollars in the 2016 budget year. Income from the sector had fallen by more than $7m (£5.5m) over the last quarter according to the tourism ministry.

The Canadian Foreign Affairs chief who visited the country called for political reforms, peaceful and inclusive political dialogue. Canada expressed ‘‘concerns over the deaths and violence arising from the recent unrest, particularly in the Oromia and Amhara regions.’‘

With news that Germany had lifted a travel warning to its citizens hoping to visit Ethiopia, authorities in the Horn of Africa nation said they were hoping that the United States (US) and United Kingdom (UK) will follow suit soon, days after reports of tourist revenue falling.