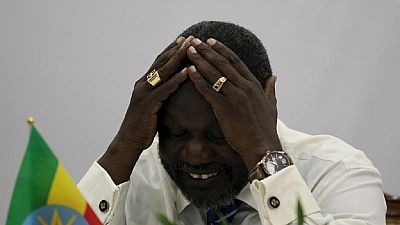 The Ethiopian government has forced former first Vice President of South Sudan, Riek Machar, back to South Africa citing his lack of permission to stay in the country.

The state affiliated FANA broadcasting corporate reports that the Department of Immigration and Nationality Affairs said Machar entered the capital, before flying to Sudanese capital, Khartoum, after which he returned to Addis in as many days.

The main reason for the action by the authorities was because Machar did not fulfill immigration requirements to stay in the country.

We will not support an armed struggling group or anyone who opts for path of war and therefore we will not allow any armed movement which is detracting from peace in our region both in Ethiopia and South Sudan.

The Ethiopian agency also dismissed a report by the ‘Sudan Tribune’ news portal, which report claimed that Machar ‘‘was heading to the Soudan Peoples Liberation Movement-In Opposition (SPLM-IO) headquarters in Pagak, near the Ethiopian border and was later advised either to board back to South Africa or risk being deported to Juba.’‘

Ethiopia’s Prime Minister Hailemariam Desalegn on a visit to South Sudan in October is on record to have said they will not support any negative forces to launch attacks on their neighbour.

“We will not support an armed struggling group or anyone who opts for path of war and therefore we will not allow any armed movement which is detracting from peace in our region both in Ethiopia and South Sudan,” the Ethiopian premier said during a joint press conference with Salva Kiir.

Ethiopia's PM: “Peace is very important for #SouthSudan and the region, everybody must work for peace & guns must fall silent! unmissmedia

His statement is in apparent reference to not entertaining rebel groups in the opposition who have been asked to mount an armed resistance against the South Sudan government.

Machar repeatedly called for an armed resistance after he fled the country following renewed clashes with forces loyal of President Salva Kiir. He went to the Democratic Republic of Congo, then to Sudan before flying to South Africa to seek medical attention.

Attacks on the country’s highways and other attacks on the civilian population has been laid at the doorstep of rebels. The latest is the abduction of 30 school children even though they deny any involvement.

Hailemariam is one of the guarantors of the peace deal signed in 2015 with Ethiopia’s former foreign minister Seyoum Mesfin acting as the chief mediator of the deal that allowed former South Sudan first vice-president to return to the capital in April year.