Obama, Trump meet at the white house to begin a transition of power 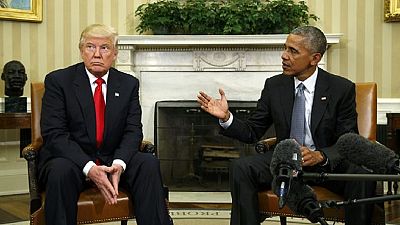 US President Barack Obama on Thursday met with President-elect Donald Trump at the White House.

This is the first public step in a transition of power after the Republican businessman’s surprise victory in a bitterly fought election campaign.

I just had the opportunity to have an excellent conversation with President-elect Trump. It was wide-ranging. We talked about some of the organizational issues in setting up the White House.

There is no love lost between the two men, who have had almost no one-on-one contact previously.

Trump says he look forward to dealing with the president in the future, including counsel.

“Well, thank you very much President Obama. This was a meeting that was going to last for maybe 10-15 minutes and we were just going to get to know each other, we had never met each other. I have great respect. The meeting lasted for almost an hour and a half and it could have, as far as I’m concerned,” Donald Trump said.

President-elect Donald Trump says it was a “great honour” being with President Barack Obamahttps://t.co/2EudkM4RFc https://t.co/OmfpY6nFiv

Obama on Wednesday said despite his major differences with Trump, he would follow the lead of former Republican President George W. Bush in 2008 and ensure a smooth handover to Trump.