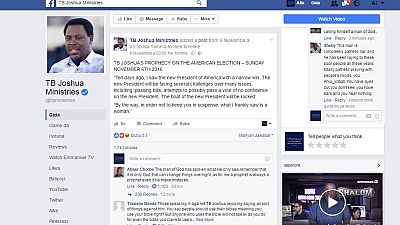 The ‘deleted’ Facebook prediction that predicted victory for Hillary Clinton in the United States elections has been restored to the page of TB Joshua Ministries. The church said the post was ‘mistakenly removed.’

The failed prediction led to a huge social media backlash on the influential Nigerian televangelist, TB Joshua, who is known for making such electoral predictions and other general prophecies.

The BBC further reports that a email sent from the Social Media Department of the church clarified that the failed prediction was “mistakenly removed and has been reposted as such is not our policy.”

Ten days ago I saw the president of America with a narrow win... What I frankly saw was a woman.

On November 6, two days to the polls, the ‘prophetic post went up on the verified Facebook page “Ten days ago I saw the president of America with a narrow win… What I frankly saw was a woman,” the post read in parts.

The televangelist popularly referred to as ‘The Prophet’ said he had received a divine communication of Hillary’s victory over a week to the elections but contrary to what he saw, Republican Party front-runner and business magnate Donald Trump was elected as the 45th President of the United States of America.

70-year-old Trump had secured 290 of the electoral votes as against main opponent Hillary Clinton who gained 232 of the votes as at Thursday.

In percentage terms, Trump had polled 47.5% (representing 59.2 million votes) as against Clinton’s 47.7% (59.4 million votes.) The November 8 election was keenly contested after months of heated campaigns.