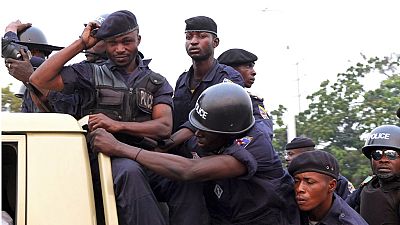 Police in the Democratic Republic of Congo are reported to have fired tear gas early Saturday morning to disperse about sixty young people gathered near the residence of opposition leader Etienne Tshisekedi in Kinshasa.

A demonstration has been scheduled for 10:00 GMT on Saturday and the police responded by deploying security personnel all around the city with anti-riot gear and water cannons to stop any attempt to protest.

Also, the transmission of French radio RFI was cut in the capital and a few arrests were reported as part of measures to enforce the ban on demonstrations after the September 19 and 20 clashes.

AFP reports that the French radio is however being listened to in Kinshasa from the frequency of neighbouring Brazzaville in the Republic of Congo.

Since the ban on protests in Kinshasa took effect on September 22, at least four demonstrations have been cancelled.

The DRC is in the middle of a political crisis occasioned by the continued stay of the incumbent Joseph Kabila beyond his constitutionally mandated second term. The electoral body have said the inability to hold elections are because of the unavailability of a voter roll and adequate time to prepare.

Government and a section of the opposition have agreed on an April 2018 date to run the next elections. The main opposition groups however are against the deal brokered by the African Union mediator Edem Kodjo.